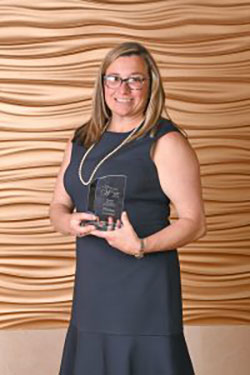 Shanna Jacoby began working for her fathers law firm as a receptionist before her promotion to paralegal and later office manager.

But it didnt stop there for her.

I was like, Hey, I think I want to do this, Jacoby said of a legal career, while noting that she enrolled in law school later in life than do most typical students.

She earned a Bachelor of Arts degree in language arts from the University of Missouri-Kansas City before going back to earn her law degree from UMKC School of Law in 2016.

Now Jacoby practices at her fathers firm, the Jake Jacoby Law Firm in Independence, where she focuses on family and criminal law. She is also the assistant prosecutor for the City of Lake Tapawingo, which has a population of slightly less than 1,000 people.

We have two very busy, very diligent police officers, Jacoby said. She works there with lead prosecutor John C. Bragg, who also works in the Jake Jacoby Law Firm. We went from [about] 20 tickets every other month to 284 last month.

Jacoby said she enjoys working on criminal cases and splitting the work with Bragg for the City of Lake Tapawingo. Under this arrangement, she said she finds herself mostly appearing in the courtroom on behalf of the city. That approach gives her a better picture of the court process as a whole.

Earlier this year, she handled her first criminal court appearance as a defense attorney in a detention hearing. She said she was able to get her client out of jail pending his trial, which she found to be both exciting and rewarding.

I have been working with what people call criminals. I just try to understand them more and be empathetic. Usually theyve just screwed up, she said.

One of her nominators, in part, said of Jacoby: She practices in federal, state and municipal courts, and together with her father, Richard Jake Jacoby, they are formidable advocates for the criminally accused. However, they also strive to educate fellow attorneys and work closely with their opposing counsel to achieve a fair result: Justice. Its not always about winning at all costs.